Halloween and the Boogyman

If this isn't "punishment", then what is?

This is an article proposing barring sex offenders from celebrating and participating in Halloween.

I know that there are similar laws out there in other places, such as in Missouri:

I really don't understand this line of thinking. Are we Americans that naiive in thinking that if all sex offenders don't decorate their houses for Halloween and don't hand out candy we can let our children go trick-or-treating unescorted, perfectly safe?

When I was a child, my brother and I would go trick-or-treating with or without friends, but never with adult supervision. It's amazing we survived because we really didn't live in that great a neighborhood.

When I grew up and began having children of my own, I realized the potential dangers out there - not just creepy sickos but speeding motorists and kids getting lost or disoriented or scared or bullied by older kids out to cause havoc. I have always accompanied my children while trick-or-treating and when my two older girls got old enough to ask if they could go without me, I informed them that they were then too old to go trick-or-treating.

I believe it is the parent's responsibility to protect their children. I cannot imagine - and don't recall - ever seeing a young child trick-or-treating unescorted.

So, considering that, where is the danger if a child unknowingly visits the home of a sex offender while trick-or-treating? What is the offender going to do? Grab your kid and jerk them into the house with you standing right there? I hardly think so.

And suppose the offender has a family. A spouse and children who are excited about celebrating Halloween. What are they supposed to do? Not participate just because their family member is forbidden to celebrate? What if the children bring home handmade Halloween decorations that they made in school? Is it really fair to tell them they cannot put the decorations up on their house? Can you imagine the sad and heartbroken looks on their faces?

She at least acknowledged that it was a problem on both sides of the fence. I admit, I don't relish the thought of my child visiting the home of a sex offender on Halloween night, but I also can say with confidence that even if she did, nothing would happen because I would be with her. She is far less safe in other scenarios.

One person left a comment that I hadn't even considered. What if a non-offender person is away from home or just doesn't want to celebrate Halloween? Then, every person who passes by that home would then conclude that a sex offender must live there.

When we examine this proposal, what then do we really see? There is no need to protect children that are otherwise already protected by accompanying parents. All this law would do is PUNISH sex offenders AND their families. There have been absolutely NO reported incidences happening of a sex offender harming a trick-or-treating child on Halloween night. Where is the basis for this law?

Just another nail in the coffin as American's rights are being stripped away.

Fortunately, for me and my family a law such as this would make no difference where we live. We are so rural that no one ever comes trick-or-treating at our home anyway. When I take Maddie trick-or-treating, I have to drive her to the nearest "neighborhood" which is about five miles down the road.

Even so, I'm against this proposal based on the principle alone. Hands down, the best way to protect the public is for them to be responsible enough to protect themselves AND their own children. No law could ever measure up to that kind of success.
Posted by Lynn at 8:43 AM 2 comments:

Well, folks, my book has just been sent to the printer. It is time to celebrate! :) Too bad I don't have any champagne or anything else to celebrate with. Hubby is currently asleep in his recliner, taking a power nap after digging a ditch for a french drain out front all morning. I can't even celebrate with him...

Funny, though, when my publisher called me today to tell me we are officially launching the book and that we should celebrate, I told her I didn't have any champagne, she told me she was going to eat some cherries. I have cherries, too, I told her, and so I just celebrated by eating a whole bowlful of them!

Anyway, as soon as I know when the book will be available, I'll be letting you know. Meanwhile, pass the cherries, please!
Posted by Lynn at 1:24 PM No comments:

OK, now that I sorta let the cat out of the bag, I might as well get it all out there on the table...

My book is titled Consensual Consequences: A True Story of Life with a "Registered Sex Offender". This book is about how I met my husband, our love story and our life together with his name listed on the sex offender registry.
This is the reason I am not using my real name and also the reason I've changed most of the names of the people and names of places in the book.
Our life is pretty ordinary outside of this one element, but unfortunately this one element has affected not only my husband's life, but my life and the lives of our children.
While my husband is guilty of his 1996 offense, I don't believe that he should be punished for his crime until his death. He is remorseful and paid his debt to society and yet the punishments keep on coming and he is not the only one in this family affected. Lawmakers want the public to believe that sex offender laws are not punitive (they are) and they want the public to believe that the laws help protect children (they don't). 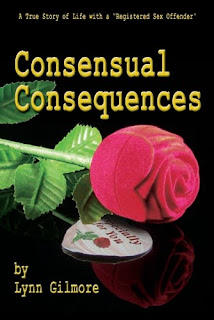 My book is going to be 256 pages and is in the final stages now. I expect the manuscript and the cover to be sent to the printers any day now. It has been a long road writing this book, which I started composing more than a year ago. It has been an incredible journey, but one I would have gladly not needed to take. I have learned a lot and am much more informed now than I was before I met my husband; before, when I believed media's portrayal that every registered sex offender was a pedophile, pervert or predator.
Oh, the lies they tell!

Book Review: A Motion for Innocence

I finished reading A Motion for Innocence by Shaun Webb last night and I have to say this was a very compelling book. Shaun is a very good story teller and his book sheds light on living in the inside of a jail cell. At times, I felt as though I was reading Shawshank Redemption or The Green Mile, it is that good. Shaun is very descriptive of the life he has suffered since being wrongfully accused of a sex crime, his trial, jail sentence and life afterward living with the label of "registered sex offender".

If you can get past the minor grammatical and spelling errors, I'm sure you would love this book every bit as much as I did. I highly recommend it, and if you are interested you can visit this website at http://www.authorhouse.com/Bookstore/ItemDetail.aspx?bookid=71847 to order it or you can find it on Amazon. You have your choice of hardback, paperback or a downloadable PDF file. The downloadable version is an inexpensive $5.99.

I guess I should include a disclaimer to the effect that I do not know Shaun or work with/for him in any capacity, and I would not benefit in any way if you were to purchase and read his book. No, but you would. It's a great read.
Posted by Lynn at 8:09 AM 2 comments:

I have just sent off my typeset manuscript to the publisher for their final review and last minute edits. It is getting closer now!

I have just downloaded and have begun reading a new book called A Motion for Innocence by Shaun Webb. I am already starting to get into the book even though I have to overlook the many gramatical errors. (I really wish the guy had gotten the book properly edited) but it looks pretty good so far.

Another book I have in mind to read is called Failure to Protect by Eric S. Janus. I've got it on order at my local library and they'll call me when it comes in.

I might as well mention a third book I read a while ago of a similar topic called Once Fallen by Derek Logue. This book is very well written and very well researched and I highly recommend it to anyone interested in learning about our exceptionally flawed legal system.

If you figure out what these three books have in common then you'll have a pretty good idea what my book is about. There ya have it: A clue! :)
Posted by Lynn at 3:54 PM 2 comments:

Patience is a Virtue.... right?

Well, hello there to those of you out there who may or may not be paying attention here...

So the summer pretty much came and went. It has been a flurry of activity around here since my last post, and now we're just ten days from the first day of school again. Ugh!

Maddie indeed did learn how to swim and has enjoyed proving it to anyone who is willing to watch. Watching her learn to swim has been pure and simple joy. Seeing her beaming face pop up out of the water with her wide happy smile and matching smiling sparkling blue eyes is something every parent wants to see as their child accomplishes something big; something like learning to ride a bike, climb a tree, or learning to swim. It just so damn awesome...

As time allows, I have been busy with work ~ working as professional graphic designer and also selling my own artwork at a variety of art and craft shows. I have another show coming up soon, over Labor Day weekend. No rest for the weary! I plan on taking lil' Maddie with me to the show, she is at that wonderful age--the age when she is much more independant but not yet a moody rebellous teen--the great age of childhood that I plan to relish every single moment.

Meanwhile, life seems to be moving forward and yet in some areas seem to be stagnating. We are wanting to move but haven't figured out a way to manifest that goal. My hubby's job situation has been very stressful and he would like a change, but for reasons I'm not ready to disclose just yet, it is virtually impossible to make such a change at this time.

I know I keep hinting at some big mystery, and I'm sorry, but I have my reasons. The day will come, and fairly soon, when the proverbial cat will be let out of the bag. I am waiting until the moment when I make the announcement about when my book is going to print and when it will be published. We have tentatively set a date for publishing, and the printer needs to have the book in hand a good four months in advance, and that deadline is looming fast.

In fact, it is my goal to have the book wrapped up and off to the printer before the end of the month, so please stay tuned!
Posted by Lynn at 1:10 PM No comments: 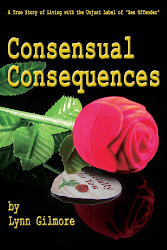